We’ve put together this composting guide to help you understand the importance of composting, what you should and shouldn’t put in your green compostables cart, and even some tips on how to make the process easy and “yuck” free.

Composting is the natural process of breaking down organic materials, such as leaves, food scraps and food soiled paper, into a valuable fertilizer that can enrich soil and plants. Anything that grows decomposes eventually; composting simply speeds up the process by providing an ideal environment for bacteria, fungi, and other decomposing organisms (such as worms, sowbugs, and nematodes) to do their work. The resulting decomposed matter, which often ends up looking like fertile garden soil, is called compost. Compost is rich in nutrients and can be used for gardening, horticulture, and agriculture.

Organic matter can be processed in industrial-scale composting facilities, in smaller-scale community composting systems, in backyard composting and in anaerobic digesters, among other options. This post focuses exclusively on curbside composting, which is collected by Marin Sanitary Service at your home or business. This material is prepared for industrial-scale composting at the WM EarthCare facility in Novato to produce Marin Homegrown Compost approved for organic farming application. Together we’re closing the loop on organic waste and returning natural nutrients to local soil. 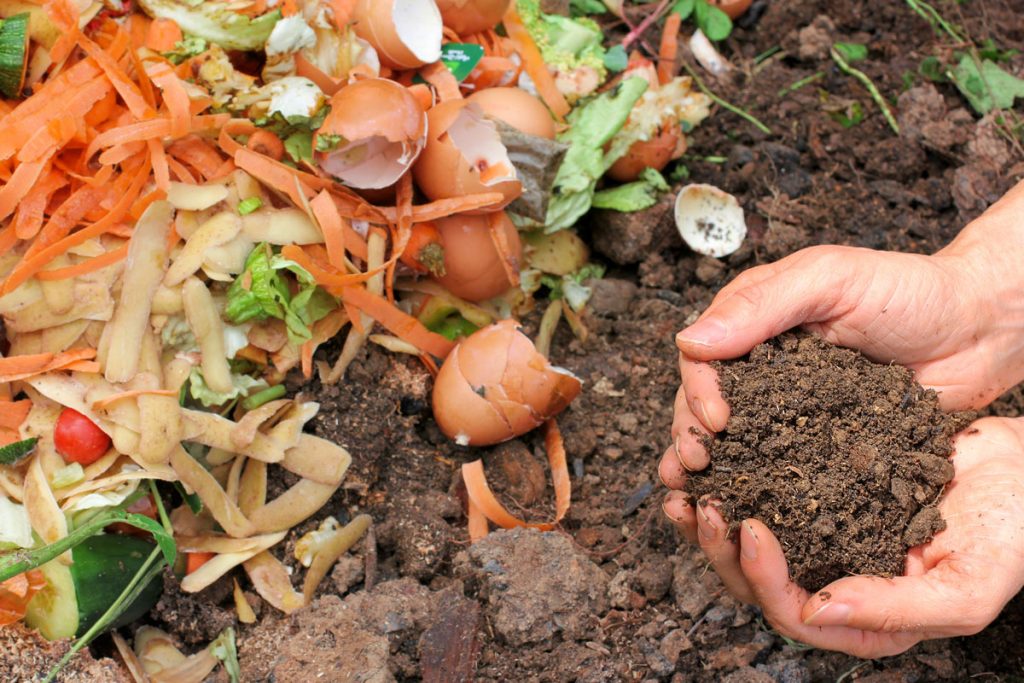 WHAT CAN GO IN YOUR GREEN CART FOR COMPOST

We want you to compost fully but please remember to only put the following items in your green cart for compost: yard waste, food scraps and food-soiled paper.

If you can eat it, it can go in the green cart! 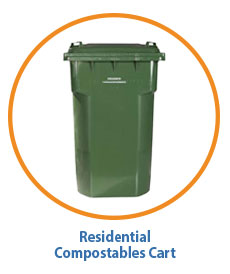 WHAT CANNOT GO IN YOUR COMPOSTABLES CART 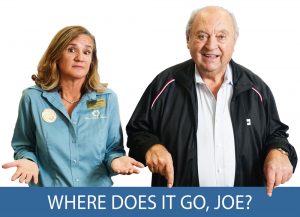 WHERE DOES IT GO, JOE?

If you aren’t sure about whether a material belongs in your compostables cart, use our handy “Where Does It Go, Joe?” online tool to find out.

Try Where Does It Go, Joe? 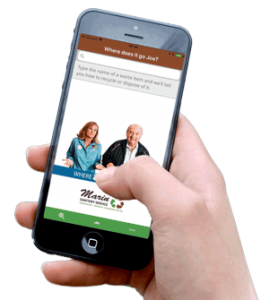 GET THE MOBILE APP

You’ll always have Joe’s sorting advice at your fingertips with the Where Does It Go, Joe? mobile app. Get it now for free! 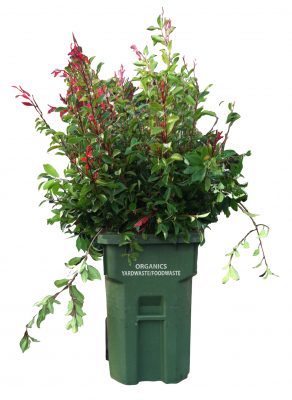 DON’T TURN YOUR CART INTO A VASE

Contact our customer relations team at (415) 456-2601 prior to your service day if you find that your total amount of compostable waste (yard waste, food waste & food-soiled paper) exceeds the capacity of your container.

Do not turn your compostables cart into a vase, please! Call us in advance for assistance if the lid won’t close. 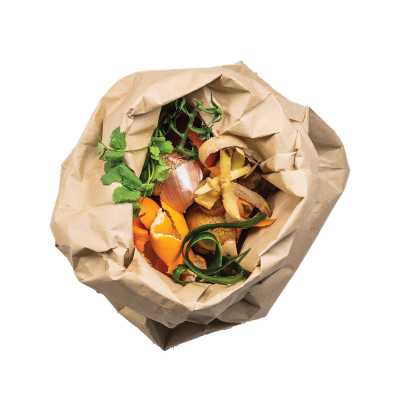 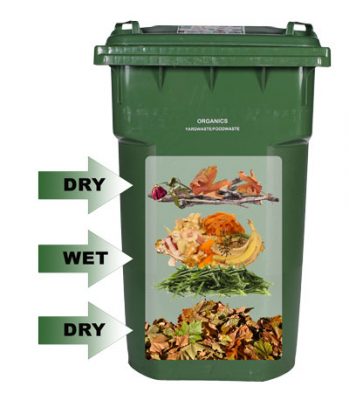 Layering wet and dry organics will help absorb some of the odor and “yuck” from your Compostables cart. You can also layer in newspaper. It really helps! 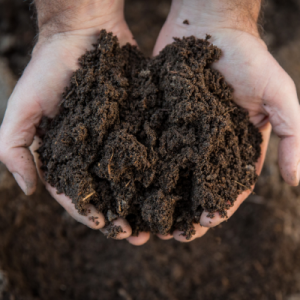 Removing organic material from the landfill is a top priority for us. Not only does proper disposal of organic materials produce a soil amendment for California farmers, the removal also has an impact on reducing greenhouse gases. When organic material like food waste is landfilled, it breaks down anaerobically (without oxygen), creating methane and other greenhouse gases that leak from landfills and contribute to climate change. Landfills are the third-largest source of human-generated methane emissions in the United States.

Compost is an essential tool for improving small and large-scale agricultural systems. Compost contains three primary nutrients needed by garden crops: nitrogen, phosphorus, and potassium. It also includes traces of other essential elements like calcium, magnesium, iron, and zinc. Instead of relying on synthetic fertilizers that contain harmful chemicals, composting offers an organic alternative. Research has shown the capability of compost to increase soil’s water retention capacity, productivity, and resiliency.

Agriculture is a major consumer of water in the United States, accounting for approximately 80 percent of the nation’s water use. How can compost help? Research has shown the water-retaining capacities of soil increase with the addition of organic matter. By using compost to foster healthy soil, farmers do not have to use as much water and can still have higher yields compared with farming with degraded soil.

Composting is a great way to recycle the organic waste we generate at home. Food scraps, garden waste and compostable paper combined make up more than 38 percent of what we send to the landfill in Marin County and 34 percent in California overall. Not only is food waste a significant burden on the environment, but processing it is costly. The average cost to landfill municipal solid waste in the United States was around $55 per ton in 2019. With the United States generating more than 267 million tons of municipal waste in 2017 and California disposing approximately 30 million tons of waste in landfills each year, of which more than 30 percent could be used for compost or mulch, we could save billions of dollars diverting the organic material from the landfill. In California alone, we send 11 billion pounds of food waste to landfills each year. The best way to reduce impacts from food waste is to prevent waste from occurring in the first place. However, even if we do everything possible to decrease food waste, there will still be food scraps that cannot be consumed (for example, a banana peel). Composting is a great way to divert those food scraps from the landfill. 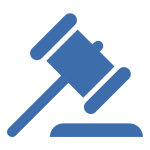 In September 2016, Governor Brown signed into law SB 1383 establishing methane emissions reduction targets in a statewide effort to reduce emissions of short-lived climate pollutants (SLCP). SB 1383 requires the state to reduce organic waste [food waste, green waste, paper products, etc.] disposal by 75% by 2025 and the law also requires the state to increase edible food recovery by 20 percent by 2025. In order to get to those disposal goals, the law requires all residents and businesses in the State to have organic waste collection service and it also requires local jurisdictions to establish edible food recovery programs that recover edible food from the waste stream. Diverting your organic material (yard waste, food scraps and food-soiled paper) from the landfill will help reduce emissions of harmful greenhouse gases like methane gas, and will reduce the impacts of climate change in our life time.

Learn more about the California recycling laws that may impact you.